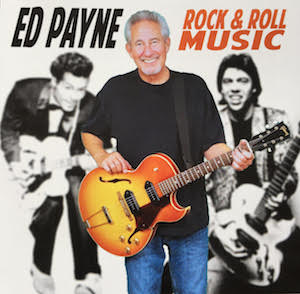 Sample tracks and buy “Rock & Roll Music” by clicking the image above.

“Roll & Roll Music” is Ed Payne’s newest collection of studio produced cover songs, this time in honor of the life of Chuck Berry who passed away at age 90 in 2017. Payne adds another layer of complexity because it is also a tribute to another one of his rock and roll heroes George Thorogood, who is known for covering Chuck Berry songs in his own unique style. Thorogood’s distinctive sound includes lots of slide guitar and texture: the guitar sound has been called “crunchy” and “dirty” and this style of playing added a new challenge for Payne and his longtime studio partner Clay Smith.

Payne chose some of the most well-known Chuck Berry songs for this album including “Roll Over Beethoven,” “Johnny B. Goode,” and “Maybellene.” For Payne, Chuck Berry was one of his early rock and roll heroes and he started listening to him around the age of 10. Berry reached the height of his success in the 1950s largely because he refined and developed rhythm and blues into the major elements that were later associated with the defining characteristics of rock and roll. He was quite an accomplished guitar player and his style included lots of guitar solos and showmanship. Berry was one of the first musicians to be inducted into the Rock & Roll Hall of Fame on its opening in 1986. Rolling Stone magazine considers him fifth in a list of 100 Greatest Artists of All Time. Berry will be remembered for the “swagger” he contributed to rock and roll music, his guitar solos, using songwriting as story telling, and emphasizing the narratives of American teens.

Ed Payne’s interpretation of these top songs are sure to please fans of both Thorogood and Berry and offer a fresh approach to some of America’s best-loved melodies. As an added bonus, Payne includes a second version of “Roll Over Beethoven,” but this time done in the style of the Electric Light Orchestra, which is very elaborate and fun, complete with a string section! Overall, Rock & Roll Music is sure to please fans of “toe tappin’” rock and roll. Enjoy!