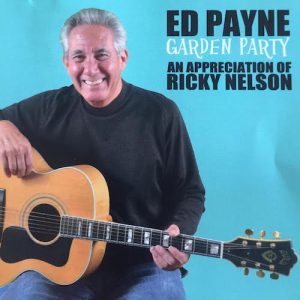 Sample tracks and buy “Garden Party: An Appreciation of Ricky Nelson by Ed Payne” by clicking the image above.

An Appreciation of Ricky Nelson by Ed Payne

For Ed, Ricky Nelson was an early influence. Nelson starred in the 1950s & 60s TV comedy “The Adventures of Ozzie and Harriet” as one of the two sons of the couple. (He was also their son in real life.) His music career began when he began performing songs at the end of the TV show with his band and became one of the top “teen idols” of the 50s.

“I watched the show every week on TV,” Ed explained. “It was the first time I ever heard girls screaming at guys singing.”

Over the course of Ed’s 50 years of singing he’s heard many times that he sounds like Ricky Nelson, so “it was kind of a no brainer that I do a Ricky Nelson tribute.”

Ed named the album, “Garden Party: An Appreciation of Ricky Nelson,” in reference to the fact that the song “Garden Party” was one of the few hits that Nelson wrote himself, and is a song about a 1972 performance at Madison Square Garden where Nelson and his band mates appeared dressed in the typical scraggly style of the day, and played new material that the audience hadn’t heard before. They were booed off the stage. Ed wanted to turn that sentiment around with this tribute album. One of the memorable lines from the song “Garden Party” is, “everyone knew my name, but we didn’t look the same.” “At that concert, he was not appreciated. For his positive influence on my musical life, thought the least I could do is show my appreciation for him on this tribute album!”

Ricky Nelson died in a tragic plane crash while on tour in 1985 at the age of 45. He saw huge success in his early life: from 1957 to 1962 he had 30 top 40 hits, more than any other artist besides Elvis and Pat Boone. While he never saw the same level of fame and fortune in his later years, he was still a dedicated artist who toured frequently and created new material.

“People my age were still fans when he died,” Ed said. “We grew up with him on the TV set.”