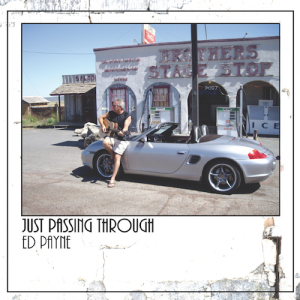 Click on the image above to buy “Just Passing Through” by Ed Payne.

Ed Payne recorded his first album of original songs in 2011, but the songs had been written over the previous decade. Many of the songs on the album tell stories from past relationships, with titles like “Love Gone So Wrong,” and “The Time of Day.” The album title “Just Passing Through” alludes to passing through life and love and literally passing through town, as depicted on the cover photo of Ed sitting on the fender of his car playing his guitar at a “stage stop” in Brothers, Oregon.

“I thought it would be a good pic for an album titled “Just Passing Through” because the Brother’s Stage Stop is such a cool old building. It was built in the 1880s, and then it has my Porsche and my guitar, makes it look like we’re just passing through,” Ed explained.

But the album is mostly about passing through life and making the most of the journey that we are on while we are here. The last song is perhaps the most poignant. Written for his father James Payne, the song is entitled “It’s Been a Great Ride,” which were some of his father’s parting words a few hours before his death. When he said that, I replied, “you’re right dad, it has been a great ride and to put it a little further into rodeo terms, you made it the distance, you stayed on for the whole eight seconds.” To which dad replied, “speaking of the rodeo did I ever tell you the one about Olie and Olga at the rodeo?” With that he proceeded to tell mom and me an Olie and Olga joke that we’d heard from him before. His voice was weak but he didn’t miss a line clear to the slightly off color punch line at which he and Mom and I all laughed. I thought to myself, “how cool is this, here he is within hours of death and still making jokes.” I was truly moved and inspired.

Chuck Berry was an influence for some of the instrumentation, which was fleshed out largely by Ed’s good friend and music collaborator Clay Smith of SoundSmith Studios. The song “Country, Blues and Rock and Roll” refers to his musical proclivities at the time, with lyrics that basically state, “I like all kinds of music as long as it’s country, blues and rock and roll.”

“Love Gone So Wrong,” is the only pure blues song on the album. Usually Ed’s songwriting process involves thinking of a song title and writing some words that go with that, or playing guitar and hearing a new riff. But for this song he was standing at the mic playing a new blues chord and it just came out. The lyric, “I miss that women now that she’s gone,” fit really well with what he was doing on the guitar.

Tales of love lost continue on the song “Women Like You,” about a lady who stood him up on the third date because, (Ed found out later) that he had said on the second date, that he didn’t plan to get married again. She subsequently became a girlfriend for a season or two and is still a friend.

“This Pirate’s Turnin’ Sixty,” is a spinoff of the Jimmy Buffet song, “A Pirate Looks at Forty,” that Buffet wrote about Philip Clark, a local that hung around a bar called the Chart Room in Key West, and who spent most of his first forty years as a drug smuggler. For Payne, he wrote this song as he was looking towards his 60th Birthday, and it carries the same sentiment as “I’m Gonna Rock Until I Roll,” which is basically that he will be happily playing music and enjoying life until he’s old and grey.

Thank You (For Saving Me From You)

You Can Have That Woman

Country, Blues and Rock and Roll