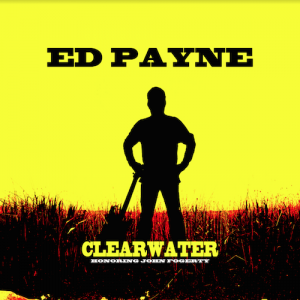 Sample tracks and buy “Clearwater: Honoring John Fogerty by Ed Payne” by clicking the image above.

“John Fogerty is one of my top rock and roll heroes,” Ed said. “He is to Credence Clearwater Revival (CCR), like Jeff Lynne is to the Electric Light Orchestra. He’s the founder, lead singer, songwriter and lead guitar player.”

Credence rose to fame during the late 60s, “my college and partying years,” Ed said with a laugh. “Between ‘Proud Mary’ and ‘Bad Moon Rising,’ we turned it up!”

One of the more interesting aspects of John Fogerty, is that although he is “a west coast kid all the way” (born in Berkeley and raised in El Cerrito, California), his music was primarily inspired by the deep south, with songs like “Down On The Bayou” and “Proud Mary.” He has had a fascinating life, and experienced many of the negative aspects of working in the commercial music industry. He has also had a very successful solo career and continues to perform and tour throughout the world.

Ed Payne’s tribute album is entitled, “Clearwater: Honoring John Fogerty,” and the title is a reference to Fogerty’s 2007 release “Revival.” The cover art on Ed’s album is also a replica: just like photo of John on the “Revival” album, the photo on Ed’s tribute album shows his silhouette and an electric guitar against the backdrop of some marshlands. Using the title “Clearwater” was also a reference to this photo that looks like it was taken near water.

On Ed’s tribute, he plays both Credence songs and several of John Fogerty’s solo songs.

“He is one of my very, very favorites, and a huge influence,” Ed said. “I love playing John Fogerty songs!”