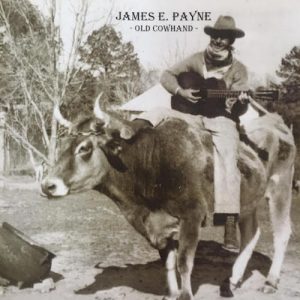 One of Pro Payne Production’s first published projects, “Old Cowhand,” was a compilation of songs sung by Ed Payne’s father, James Payne when he was 87, and fleshed out in the studio by longtime friend and collaborator of Ed’s, Clay Smith at SoundSmith Studios in Bend, Oregon. What started as a fun legacy project to bring joy to the last months or years of James’s life turned into a national hit when the article written about the project by Eugene’s Register Guard got picked up by the Associated Press, and requests for the album poured in from all over the country.

James grew up in Alabama, and while he wasn’t necessarily a “real cowboy,” he did grow up on a farm, and his life had some commonality with Hank Williams, who was born only a year after in a nearby Alabama town. And, the fellow who taught Hank how to play guitar was Rufus “Tee Tot” Payne who was born on the same Payne property in Sandy Ridge, Alabama as James. Jim, as he preferred to be called also played guitar and sang, but mostly with his family, and the album’s cover photo shows him as a teenager sitting on a steer, wearing a cowboy hat and strumming his guitar.

He was called to the American West after his parents died within a week of each when he was 16 and he joined the Civilian Conservation Corps so, as he said, he could “see more of the world than he could on foot or horseback.” With the CCC’s, he ended up in Junction City, Oregon. The group mostly worked for the Forest Service doing roadwork, felling trees and putting in telephone lines and building parks. Work with the CCC started to dry up, but they still had a camp near Cottage Grove, so James went there on a weekend pass, where he met his future wife, Pauline Willis.

Soon after they were married, James enlisted in the Army to go into World War II and headed to Southeast Asia for three years as part of the 96th Signal Battalion in the US Army. Pauline taught piano and guitar lessons in his absence, and when he returned, as a Christmas/Welcome home from the war gift, presented James with a mahogany Martin 0-17 that she bought at the local drugstore for $39.00. Today it is a family heirloom, and hangs on display in Ed’s home in Bend.

Both James and Pauline filled the house with music during Ed’s childhood, and his mother often sang him and his brother and sisters to sleep at night, a tradition that Ed carried into the lives of his own children. “Family and friends’ gathering almost always included live music by my family and others,” Ed explained.

The seeds for the project germinated after James suffered an aortic aneurysm and had to move from their home of 56 years into Middlefield Oaks (Assisted Living) Retirement Center in Cottage Grove. He borrowed an old cassette recorder from his son in law Roger with the idea of committing his life to history and posterity. Soon his jokes, stories and quips turned to the old cowboy songs he loved.

“I was visiting my parents once a month, and one time when I was there he told me about his recordings and said, ‘I’ve been singing these cowboy songs… was wondering if you and Clay could do anything with these tapes?”

Ed didn’t make any promises, but next visit to Cottage Grove, brought the first song “Cool Water,” which Ed and Clay had produced into a masterpiece of sorts by adding tracks that made it sound like Jim was backed by a six or eight piece band with guitars, fiddle, drums, mandolin and keyboards and, Ed’s backup vocals.

“Dad was blown away,” Ed said.

Every month after that, Ed would come back with a new CD that would have all the songs he and Clay had produced. At about the six or seven song mark, Ed made a promise to his dad that if he would stay healthy and alive until his 88th Birthday that they would have a birthday/CD release party for him. James did make it until his birthday, and not only did the Register Guard do a piece on him, but the local TV station came down to do a news story about it as well. Once the story hit the AP, Ed got calls from New York, California, Georgia and more from people requesting a copy of “Old Cowhand,” James E. Payne’s first and last album. There were over 100 attendees at the party and after Ed’s band did a 45-minute concert, Jim autographed 100 CD’s and gave one to each guest until the CDs were gone.

Jim passed away a little more than six months after his 88th birthday but for that seven months, he relished in his local (and beyond!) celebrity status. He was well loved by the staff and the residents at Middlefield Oaks who remember him singing songs whenever the fancy struck him. He spent most of his life on his 40-acre farm on Cottage Grove, as well as working for Bell Telephone Company, and he brought joy to his family and friends through music. Ed carries this tradition forward in his own life through his many recording projects and Pro Payne Productions, which is also a family affair, supported by the graphic design talents of Ed’s son Adam. And, of course Clay Smith of SoundSmith Studio.

“As a kid I remember how much joy my dad’s music gave him, our family, and others. I decided then that I wanted to experience that joy for myself,” Ed said. “Then, years later, my dad’s love of my music only served to further inspire my interest in and love for writing, performing and recording music.”

Some Days are Diamonds