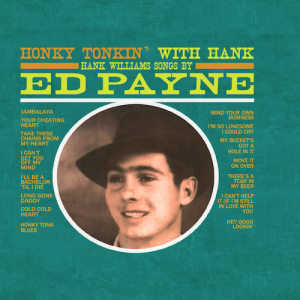 Sample tracks and buy “Honky Tonkin’ With Hank” by Ed Payne by clicking the image above.

“I did this album because this is where I started with music; these are some of the songs I heard my dad sing when I was a kid,” Ed said.

Ed’s father was born in Sandy Ridge, Alabama and had some loose family “connections” to Hank Williams. Ed dedicated this album to his dad as a way of honoring those family roots. The photo on the cover is of Jim, and there is a similar photo of Hank Williams on the back of the liner notes, also in a fedora.

The two were born less than a year apart and in close proximity. The Payne property in Sandy Ridge was also the birthplace of Rufus “Tee Tot” Payne. His nickname “Tee Tot” was a pun for “teetotaler” (which he was not!) as he usually carried a homemade mixture of alcohol and tea with him wherever he went. As the legend goes, Tee Tot was the black street musician who gave guitar lessons to Hank Williams in exchange for meals or money and taught him how to improvise blues chords.

Rufus had a major influence on Hank Williams’ style, and Hank later went on to become one of the most significant and influential American artists of the 20th Century. He recorded 35 singles that would place in the Top 10 of the Billboard Country & Western Best Sellers chart, including 11 that ranked number one.

Jim Payne heard many stories about the young Hank Williams as he was growing up. As Hank was beginning his musical career he frequently played the Honky Tonks in the little towns around Sandy Ridge. Jim’s older brothers got to hear him play and witnessed Hank being thrown out of a few Honky Tonk windows!

Some of Jim’s older brothers were also fireman, and told tales of the young Hank coming around to shine their shoes, always carrying his guitar on his back. They would often give him a quarter to play a song or two.

Hank Williams songs were part of Jim’s repertoire of old cowboy tunes that he sung to his family and friends. Ed learned these songs growing up and recorded the songs in Jim’s honor. Towards the last years of Jim’s life, Ed made monthly trips to his assisted living home in Cottage Grove where Ed would set up his small PA and do a one-hour show that included a few Hank Williams songs and old standards, as well as one-liner comedy from the likes of Rodney Dangerfield, Groucho Marx and Jack Benny, entertaining and brightening the days of the 40 or so residents usually in attendance. Ed and his father also collaborated on an album together called “Old Cowhand,” which featured fully-produced versions of his father’s roughly recorded cowboy songs.