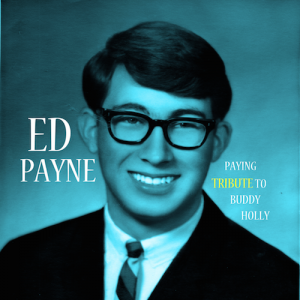 Buy “Paying Tribute to Buddy Holly” by Ed Payne by clicking the image above.

Buddy Holly was one of the first artists that caught Ed’s attention when he was 10 before Holly died in a plane crash. As he says in the album notes, “I was a few months shy of eleven years old, but I still vividly remember hearing the news.”

Ed had just barely started developing his own tastes in music beyond what his parents played around the house. “Peggy Sue,” one of Buddy Holly’s number one hits, was one of the first songs Ed learned to play on guitar once he started linking chords together. He also really liked Holly’s vocal “hiccup” style.

Even though Holly rose to fame around the same time as Jerry Lee Lewis, Carl Perkins and Elvis, Holly’s style was notably different, especially his guitar playing, which is characterized by really fast strumming and lots of chord changes.

The song “American Pie,” is a song by Don McLean commemorating the February 3, 1959 plane crash where Buddy Holly, the Big Bopper and Ritchie Valens died on their way to a show in North Dakota from Iowa. The most memorable line of this Don McLean song is “the day the music died.” McLean delivered newspapers as a kid and first learned of the accident while he was out on his route. “February made me shiver, with every paper I’d deliver,” is another stand out line of the hit song.

Buddy Holly was only 22 years of age when he died, and is still considered one of the most influential of the early rock and roll musicians and inspired John Lennon, Paul McCartney as well as many others.

“Buddy Holly has been a major influence on my love of music and my music style,” Ed said. “And now, looking back fifty plus years, his songs are some that I have enjoyed playing and singing the most.”