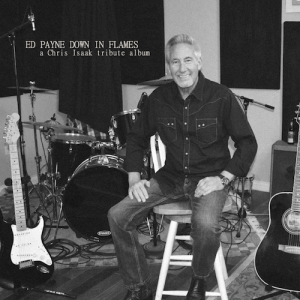 Sample tracks and buy “Down In Flames” by clicking on the image above.

Ed Payne has seen Chris Isaak perform in Bend three times and loves his live shows because of Isaak’s incredible showmanship: He wears “outlandish” cowboy suites and mixes in a healthy dose of comedy with his excellent musicianship!

Ed says his long-time music collaborator Clay Smith of SoundSmith Studios is to “blame” for this latest tribute release. As a birthday gift, Clay gave Ed Chris Isaak’s latest (double) album in 2015 titled “First Comes the Night.” It was love at first listen, Ed was “blown away” by the songs and ended up covering 12 of the 17 songs on that release for this project. “Of these 12 songs, we did 11 in the same key as Chris.”

He loved all the material but, especially the song “Down in Flames” where the main character in the song is going to hell for all of his sins. Ed said, “that song and its lyrics struck a real chord with me!”

“Chris Isaak is a lyricist and vocalist hero of mine,” Ed said.

Chris Isaak was born in Stockton, California and was very successful academically in high school, graduating 1974 class valedictorian, head of the all-male cheer squad, and student body president. He put together his first rockabilly band called Silvertone after graduating from college in 1981, and three of those original members remain with Isaak as his backing band to this day.

His most famous song is “Wicked Game,” in which an instrumental version was featured in the 1990 David Lynch film “Wild at Heart.” The song became a top 10 hit in February of 1991. Isaak made a number of movie and television appearances including in his own show, “The Chris Isaak Show” featuring Isaak and his band playing themselves with various scenes from his real life backstage.

“This is one of my favorite tribute projects yet,” Ed said. “It’s such great material.”