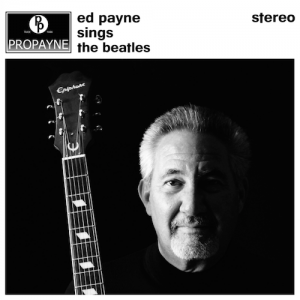 Buy “Ed Payne Sings The Beatles” by clicking on the image above.

“The Beatles have been my number one influence in my life-long love of music,” Ed said. He first heard the Beatles in 1963 on the cafeteria jukebox at Cottage Grove High School. The song was “I Want to Hold Your Hand,” and he was “hooked.” A few months later, they made their U.S. live debut on the Ed Sullivan show.

The Beatles had their first U.K. hit in 1962 and their first U.S. hit in ‘63. When they played on the Ed Sullivan Show in February of ‘64, “Beatlemania” practically happened overnight.

George Harrison, the Beatles’ lead guitar player, was the person who inspired Ed to learn to play the guitar. “He was cool, the whole band was cool, lots of aspiring guitar players latched onto him.” Harrison’s style was a mix of Buddy Holly, Carl Perkins and Chuck Berry. Ed’s long-time collaborator Clay Smith was also inspired by Harrison to start learning the guitar during his teenage years.

For Ed, learning the Beatles was a healthy challenge. Their songs were more difficult with lots of minors and other chords that aren’t as familiar to the beginning musician. But during his college years, he bought a McCartney and Lennon songbook and started to figure them out.

“Most of their songs were in too high of a key for me and I didn’t know how to transpose to lower keys yet.” But eventually Ed fit the songs to his vocal range and while he knows he “doesn’t sound like Paul McCartney,” for this album, Clay and Ed tried to be true to the Beatles’ arrangements.

The songs Ed chose for this Beatles’ tribute are from the “early years” (1963-65) which is his favorite Beatles era. “The early work is the most pleasing to my palate,” Ed said. “I love all of their music but, starting with Sergeant Pepper and Magical Mystery Tour, some of the material was a little foreign sounding to me. It took a few years to fully warm up to that era.”

The album art for this release was particularly inspired. The photo of Ed on the cover was taken in one of the sound booths at SoundSmith Studios by Clay Smith where the album was recorded. It’s intended to replicate the faces in the shadow theme of the cover photo on “Meet the Beatles,” the Beatles’ first US release that came out on Capitol Records. The guitar in the photo is an Epiphone, in honor of one of the guitars that John and George both played in the later years.

Inside the cover of Ed’s album is a picture of stencil artwork created by his son, Adam Payne, who does the cover art design and licensing for all of Ed’s albums. Adam’s logo design for ProPayne Productions was inspired by the Beatles UK label Parlophone logo.

“Fifty-four years have passed since that day [when he first heard the Beatles on the jukebox] and, I’m an even bigger fan now than I was as a teen. The fifteen songs on this album are just a few of my many favorites from The Beatles’ early years.

I Saw Her Standing There

I Want to Hold Your Hand